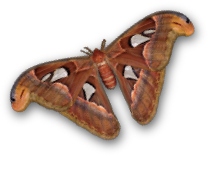 Infused with black humor, The Atlas Moth is an unsurvival story about death, Chinese checkers and butterfly collections and how they all tie together.

"There is no reason to put things off for any longer. Everything feels so natural. In fact I can hardly wait. I should learn patience, it's a shame there's no time for that."

The book is intended for adults and is not recommended for children under the age of 12 because of dark and disturbing themes.

Compared to other twenty-somethings Piia's life is centered on quite different matters. She is only interested in death and the closest you get to it is by sleeping without dreams. On the other hand Piia's best friend Venla wants to live until one hundred. There's only a year left until that, but Piia doesn't plan to be around that long.

On online forums Piia gets to discuss her favorite topic. She finds new friends all over the world, even a few in her home country, Finland. These very different people are united by one thing: their desire to die. Piia's old friends' affairs make her even more convinced that life is not for her. Sometimes, things just don't work out the way they were planned. 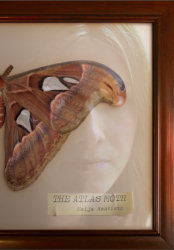 There is also a Finnish version of the book available, titled Atlaskehrääjä.

The eBook version is a standard PDF which can be used with screen readers. The eBook costs €6.00/$7.55.

Did the description pique your interest? Order the book! It will give you good karma - and of course something enjoyable to read.

The book is available for purchase from Amazon and other online bookstores. You can also purchase an eBook version from the Lulu Store. If you are a journalist or have a book review blog, contact the author for a review copy. Maija is also happy to do interviews.

The author of the book, Maija Haavisto, is a journalist from Helsinki, Finland. She has been a professional writer since 2000, working for e.g. computer, decoration and music magazines, with some freelance copywriting and translation on the side. Her most important passion is still medicine and she has authored two medical textbooks.

She has been awarded in several writing contests, including ones held by major Finnish publishers (Gummerus, Tammi), TV channels (Yleisradio) and newspapers (Helsingin Sanomat), and her poetry has been published in two Finnish anthologies.

Maija wrote her first novel manuscript in 1998 and it was featured in Nyt, the weekly supplement to Helsingin Sanomat, the biggest newspaper in Finland, in March 2000. The Atlas Moth is her fourth novel. Maija has just finished her fifth novel manuscript Viable and is already planning the next one.

Which genre does the book fall under?
Mainstream fiction would probably be the closest match, even though the topic is far from being mainstream.

Is the book about depression?
Not really - it's more for the reader to decide.

Why such a morbid topic? Doesn't the novel encourage suicide?
No matter what people wanting to abolish the freedom of choice would like to tell you, suicide is a basic human right, though obviously it should never be encouraged. The best way to reduce the number of suicides would be to make it less of a taboo in society. The book does not promote, encourage or recommend suicide. It also does not contain descriptions of self-harm which could trigger those with

The cover art is amazing. Do you think the same guy could design a book for me?
Stephen Caissie is indeed a highly talented designer, who knows how to think outside of the box (although the idea for this cover mostly came from author). You can browse his design portfolio on DeviantART. Don't hesitate to contact him!

Who is the girl in the cover?
Some people have got the impression that the picture is of the author, so this misconception should be corrected. The picture is a so called stock photo, so the girl remains a stranger to the author and the cover artist (although she does represent the main character).

Why does the cover have that weird frame?
The "weird frame" is a wooden frame with the atlas moth hanging inside. Both the frame and the continue to the back cover. So, spread out the cover depicts a framed butterfly in its entirety.

"The book is well written, the style is pretty direct and conveys very well the main character's inner world, while portraying the outer world as dry, grey reality with the bare minimum of description. Overall the novel is an enjoyable experience and is easy to relate to - probably much more thank you think."
Read full review

"This novel tackles a very controversial and "dangerous" subject, and the story has foundations so solid that one cannot help thinking that the author either knows someone who did something similar or that she studied the subjects involved thoroughly.

Aside from comments on the subject, the no-nonsense style and (consequent) brief length of the book also add to the story itself, making it even more dry, gray and matter-of-fact. The humor is also very dry, with the main character's repeatedly stated desire to commit suicide becoming the main running joke.

The beginning of the book

"The snowflakes descend on the street as a flock of little white butterflies. "You are not beautiful or unique snowflakes", I whisper to them. Little by little the snow covers the garbage on the street, the last cardboard shells and plastic cones. Every one of those shells still houses traces of heavy metals, barium and strontium and perhaps other things whose names I have forgotten. Every year dozens of tons of these poisons are discharged into the sky to produce patterns of different colors. What a waste. I'd have come up with better ways to use them.

Three people were relieved of their lives at the intersection of the years. Two were mugged to death and one was found in the snow, frozen to death. This kind of thing happens. The amount of stupidity in the gene pool dwindled temporarily, but there will always be a thousand times more. The world will never change, obituaries disappear in obscurity.

For me the last day of December was a day just like any other, spent with motion pictures and online discussions. At nine in the evening I went to see Venla on the second floor. She hadn't been aware that it was the last day of the year nor did she really care - why would she. We had a few cups of rosehip tea and some sandwiches. Venla fell asleep before the fireworks started. I watched them for a while, but my thoughts were mostly wrapped in their heavy metal content.

When I got home I made a New Year's resolution. It's about time to get done something I have been procrastinating on for quite a while."